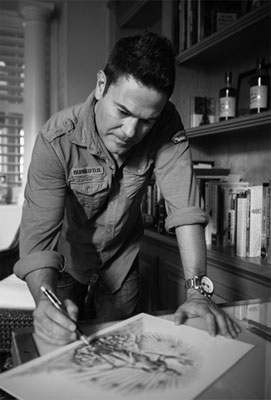 Steven Noble has reached a milestone in his career by celebrating a remarkable 25 years as a highly successful world recognized illustrator with a vast variety of award winning illustrations in the span of his lengthy career. He was just recognized by a panel of judges from amongst his peers as one of the “200 Best Illustrators Worldwide” for 2016/2017.

Since graduating from the University of California, Davis in 1990, Steven Noble has mastered a wide range of detail and style within the scratch-board medium and has become internationally recognized for his work from clients as far way as Japan to Europe.

Over the years, he has become equally adept in the woodcut, pen and ink, traditional engraving and steel engraving styles, as well as a variety of stylized scratchboard techniques. His highly disciplined and complex line work is based on over 25 years of experience using X-Acto precision knives carved into pre-inked clay boards which generate very fine line strokes which allow a versatility in the detail from bold woodcuts to very fine traditional 19 century steel engravings.

Over the course of his career, he has created many nationally recognized logos and ad campaigns for a large list of prestigious and high caliber clients such as Coors (corporate/packaging logo), Exxon-Mobil (stock certificate), JP Morgan (annual report) and Mercedes-Benz (ad campaigns). A lot of his expertise encompasses a large volume of subject matter that include food, portraits, animals, maps, architecture, and corporate conceptual images.

In 2001, he won the “Meade Show Award for Excellence” for creating the best corporate conceptual illustration for an annual report for the Wet Seal’s 2001 Annual Report. In addition, in 1996 his work was recognized in the Communication Art Magazine for the best advertising spot for Beaulieu Vineyards.

Steven continues to strive for excellence in his work and is always up for the next challenge. One of his last projects was a series of illustrations for the acclaimed Children’s book Zathura which came out (Fall 2005) at the same time as the release of the movie Zathura.

In the most recent years he achieved success with the creation of the official logo of the White House in 2008 and worked on award winning illustrations for both Kraken Rum and Espolon Tequila which have won him acclaim around the world. He continues to seek the next big illustration challenge to remain as one of the most hard working and prolific illustrators in the industry.